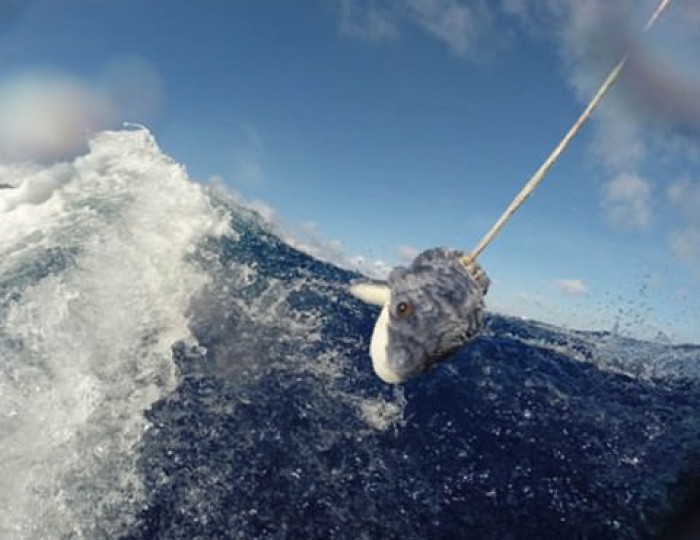 Below is the latest blog from Andreas on board Vaquita in the TJV:

It is about time to reveal one of the last secrets of Vaquita, time to confess. It is not just Christof and myself on board of Vaquita, we do have someone with us, a little girl came along with us all the way. Today is a very special day for her, she has been christend on the name Hope when she entered Neptuns realm, crossing the aequator at 22224UTC. Hope is a little Vaquita, sent with us on this long journey by Ruth from WDC (whales.org).

The Class40 VAQUITA is sailing for the protections of whales and dolphins and her small friends in the Gulf of California. The vaquita, the smallest and most endangered of all marine mammals is on the brink of extinction. Her species has the most limited distribution of all cetaceans, found only in the northern end of the Gulf of California (Sea of Cortez), within a 48km radius. The IUCN (International Union for Conservation of Nature) classifies the species as “Critically Endangered” and only an estimated 125 – 150 vaquitas remain.

The reason for their decline is the unsustainable number of animals dying in gill-nets set for both fish and shrimp. More animals are dying than are being born into the population and in only a few years the vaquita could join the Baiji as being declared extinct due to the actions of man.

To raise awareness of the plight of the vaquita and to support WDC’s campaign for Marine Protected Areas all over the world Christof Petter and Andreas Hanakamp are sailing the Transat Jacques Vabre. Across the ocean in the central Baltic Sea only 300 harbour porpoises remain. But there is HOPE: together we can save them from extinction – with Marine Protected Areas that provide a save home: without harmful fishery and deafening noise.

Learn more about WDC and our work to save vaquita at www.whales.org or contact ruth.schloegl@whales.org