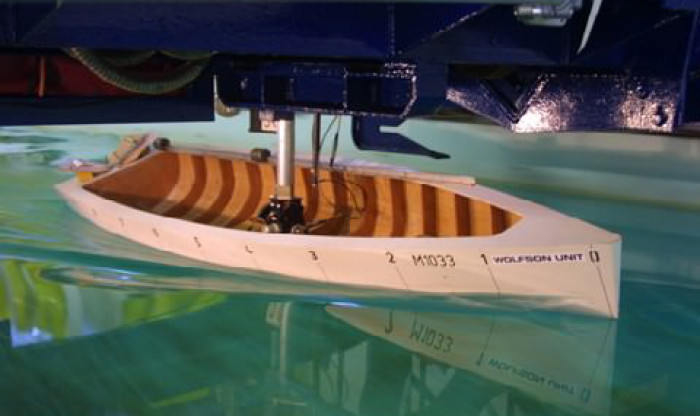 Having been a proponent of twin rudders for well over a decade Rob Humphreys and the team at HYD has good experience with the arrangement through a range of boat types, from the rather esoteric world of Open 60s and Volvo 70s through to moderately heavy cruising yachts. Our knowledge of what to do and how to do it has been partly theoretical, partly intuitive, and – through feedback from our boats – partly empirical. However, it is only very recently that we have had the opportunity to really quantify the benefits. This came through an exhaustive tank testing session on behalf of the new Oyster 885, which David Tydeman (CEO, Oyster Group) decided would both help the development of the 885 and the rest of the Oyster range.

In the early design brief discussions last year on the Oyster “PC” as it was code-named, David and I sat down and ran through his ideas for how this new yacht should fit into the range. David wanted a yacht with a beam to match the 82 (to work within UK road transport limits), a mast further aft to provide a powerful blade jib and room for 4 Owner/Guest cabins in a hull length “no more than 20mm’s” short of the LY2 MCA “24 mtr rule”. David’s naval architecture background quickly helped me persuade him that twin rudders were the way to go!

It was clear that this was going to be a bit of a sea-change for Oyster and I was pleased that David was keen to push this onwards and also to support this breakthrough with a decent budget for tank testing. We both felt it would be helpful to have fairly tangible reference information for those owners trying to understand the shift from a skeg-rudder to the twin rudder form for this exciting new model.

In fact our testing session set out to do more than just this because we also used the opportunity to let the spade rudder have its say, just for some form of completeness. We have often been asked why Oyster has tended to steer clear of spade rudders and the answer has more to do with potential vulnerability than any disrespect for its potential qualities. As any Oyster owner knows a blue-water cruising yacht has to be accomplished in a number of different ways, and one of the lower profile requirements has to be an ability to slide backwards against a Mediterranean harbour wall without necessarily endangering the steering gear. One paradox of success for Oyster is that with so many boats out there, if it is possible to do something then it has usually been tried. The expression ‘tried and tested’ comes to mind. A spade rudder, whatever its qualities in other respects, is not quite as bomb-proof as rudder hung off a full-depth skeg, but again David’s racing & technical background pushed the decisions forward.

In our tank testing we were focusing our attention on a fully-pressed up set of sailing conditions, with the boat heeled over to twenty degrees and sailing at nine knots, with a variety of leeway angles and load conditions. Separately we had commissioned North Sails to run their proprietary CFD (Computational Fluid Dynamics) panel code “Flow”, to determine the exact three-dimensional centres of pressure that are relevant to Oysters, so that we could keep an eye on what was happening to the balance of the boats. We tested a lot of other things as well but the rudder testing part was most interesting and was totally supportive of all that we had learnt to be true in the field. For a given side force and leeway angle the skeg rudder and the spade rudder were in a roughly similar ball-park, whereas the twin-rudder equivalent was in another world altogether. For example, with the twin rudders set to just two degrees to the flow the spade rudder needed to be at over six for an equivalent moment, and the skeg-hung rudder at eight – all for the same yaw moment.

Put another way, the leeward twin rudder provided 4 times as much force than a skeg rudder!

Much of the distinction comes from the fact that the twin rudders are operating in clean water whereas centreline rudders – of whatever denomination – are operating in a disturbed second-hand flow coming off the keel. The result is a much more satisfying steering experience and at the same time a significant reduction in resistance – so more speed.

From our perspective twin rudders represent a huge benefit and an Oyster owner will really appreciate it too as soon as he has the wheel at his finger-tips. But what’s also interesting is that the system fares a lot better in terms of potential reliability, especially against the spade rudder. The blades are significantly smaller and more lightly loaded, and the span is considerably shorter, making it almost impossible to damage the steering gear when reversing into a quay. And of course, with two rudders rather than one there is an obvious increase in the level of redundancy. Unlike some twin-rudder installations, the arrangement we have for Oyster means that even assuming the worst-case loss of one rudder it would be possible to still sail the boat on the compromised tack, albeit with reduced canvas.

All in all we learnt nothing new in a qualitative sense; however, in quantitative terms it was a bit of an eye-opener, not just for me but for the Wolfson Unit who had not previously run such a benchmarking comparison.

CFD analysis of the sailplan by North Sails