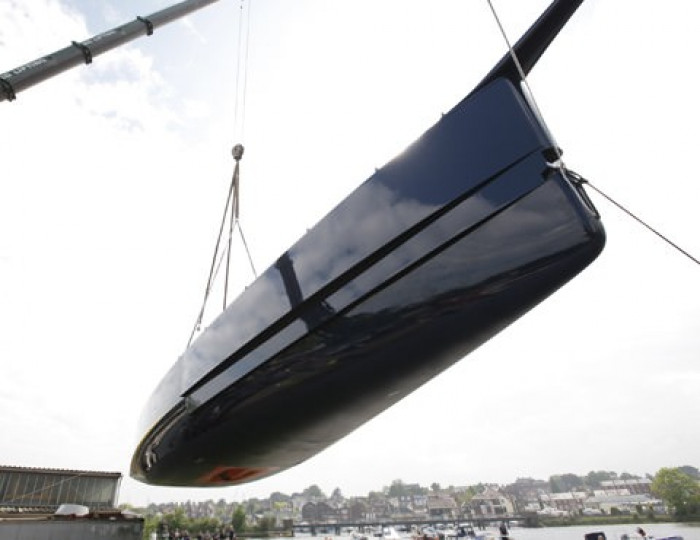 Team Russia’s new Volvo Open 70 yacht made a spectacular entrance into the world today. Its 23 metre long racing hull appeared in public for the first time hovering high over the boat sheds of builder’s Green Marine Lymington (UK). On a day that started extremely wet and blustery, a break in the weather around high water enabled the hull to be safely lowered by a massive 200 Tonnes crane into the Lymington River.

Team Russia will take part in the Volvo Ocean Race, the premiere round the world yacht race that starts in Alicante this October. The event covers over 37,000 nautical miles and visits 11 ports, culminating in a finish in St Petersburg, Russia in June 2009.

With this manoeuvre safely executed the boat was then checked, unhooked and positioned to wait for the tide to fall. Spectators from the shore and on RIBs hovering around the boat were quick to notice some of the innovative features Lymington designer Rob Humphreys had incorporated into his first Volvo Open 70 design. Most notably, the double spray rails at the front, the bluff bow and powerful stern design had people rushing for their cameras.

Michael Wood’s CEO of Team Russia was delighted to see the boat emerge from the shed; “We started building her in August last year, he explains. “It’s been a fantastic team effort, from the design by Rob Humphreys, the hard work by Simon Smith and the team at Green’s and the expert management and commitment shown by Tim Dean our project manager, also, the incredible hours of hard work behind the scenes by all our Team. It’s a great day for us, to finally see her in the water.”

With the tide in retreat, nervousness began to build in anticipation of the next stage of the delivery. This precious race yacht, which had taken approximately 34,000 man hours to build, had to wait for the tide to drop to pass under a low railway bridge further down river with little room to spare and no room for error.

Nail biting and careful navigation between the four supports of the bridge had team and crew working within 30mm either side of the supports with little more than centimetres above the deck. With the encouragement of the boats shore crew, Team Russia appeared through the bridge and into open water to rapturous applause and cheers of relief.

Skipper Andreas Hanakamp watched in anticipation as the RIBs manoeuvred Team Russia’s yacht the short distance to a pontoon off the Royal Lymington Yacht Club, where she will rest overnight before an early dawn tow across The Solent to Endeavour Quay, Gosport, as long as the weather holds.

Team Russia will have her rudders, keel and mast fitted this week and will complete her commissioning and sail trials in early June. There will be an official naming ceremony of the boat in Portsmouth on 16th June at Gunwharf Quay. 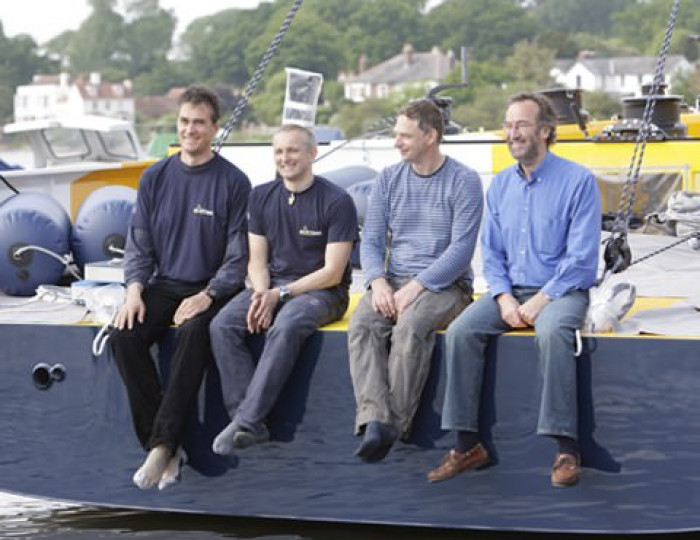 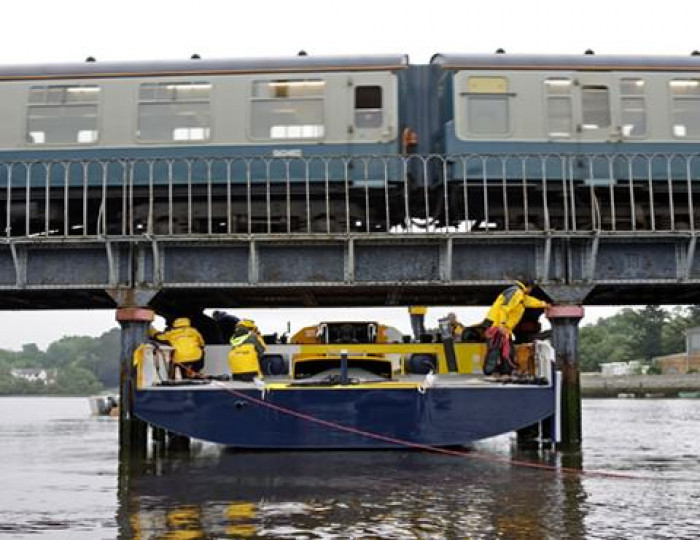