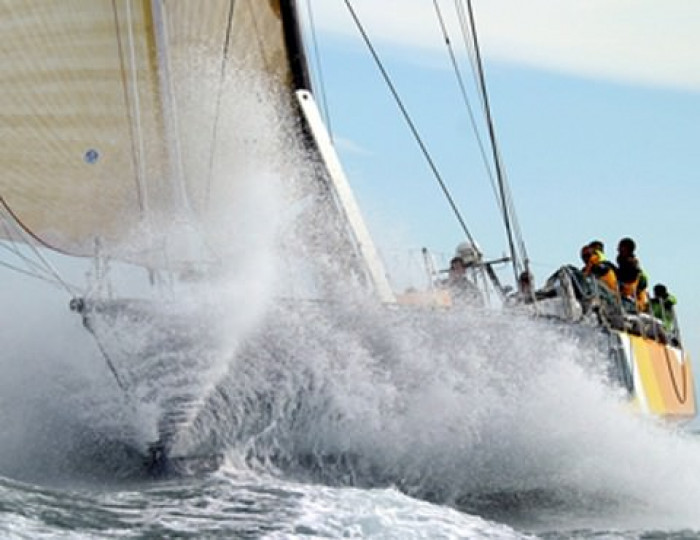 Team Russia completed its qualifier for the Volvo Ocean Race last night, coming into dock at their Portland base after six and a half days at sea, having travelled over 2200 nautical miles in a record breaking trip around Britain and Ireland.

The Russian yacht, named Kosatka, started from Portland (UK) in gale force southwesterly winds – perfect to test the boat and crew. Navigator Wouter Verbraak and skipper Andreas Hanakamp decided the conditions looked good to stage an unofficial attempt on the Round Britain and Ireland non-stop record in a monohull set by Solune in May 2004 of 7 days, 4 hours, 46 minutes and 22 seconds. As it transpired Team Russia shaved 15 hours off that record.

The first 24 hours were challenging with 40 knots winds gusting up to 50 in the English Channel and Straits of Dover. As the boat began its journey into the North Sea the wind eased. From having excess wind to start, Mother Nature moved the low further to the east, requiring the Team to adapt to lighter conditions; the combination was ideal for checking the latest generation of sails, communications and crew work.

One item that received the thumbs up was the kite board helmets. The radical looking spray rails on the bow lived up to their reputation with noticeable improvement in high speed sailing, but they produce a serious amount of spray! Even at 15 knots of boat speed, everyone was covered in a non-stop salt-water shower. Better than green water over deck, and FAST, so no complaints!

It was a fantastic ride all the way from the Shetlands to the Irish Sea. In beam reaching conditions Kosatka excelled and even though they ran north of Ireland in lighter winds and a nasty swell from several directions, they easily clocked a 420-mile day.

Constantly monitoring a low-pressure system that rolled in from the Atlantic Ocean, they set themselves up to round its centre in the west and ride the back down across the Irish Sea towards the Scillies in 25-30 knots of wind. Conditions remained perfect to blast them home to finish at 18.30 in Portland last night.

The overriding comment as the guys left the boat was “WET”. One thing to improve before the start of the race in October is water ingress. As water is rushing over the boat at fire hose speed, every opportunity to get inside is found, making the inside a wet cave.

Stay tuned the Russians are coming.