Promising start for the new HYD42 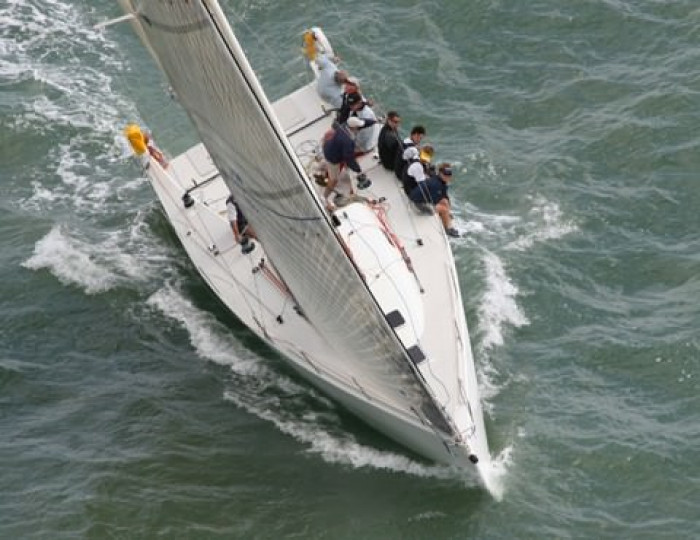 Owner Richard Matthews is delighted with the boat. “She is a very well mannered and lively boat to sail and almost dinghy like in behaviour. We have seen a mixture of conditions over the last two weeks worth of racing from very light airs to over 25 knots true wind speed and we have had some exhilarating downwind sailing, hitting speeds of over 20 knots on a number of occasions”.

Oystercatcher XXVI will finish the season racing on the East Coast before she goes back into the shed this autumn to receive some finishing touches and a proper pain job, having so far only been sprayed in undercoat in order to make her launch date! The plan pencilled in after that is to ship the boat across the Atlantic for Key West and the Caribbean racing circuit before shipping her back in time for the IRC Nationals, Cork Week and Cowes Week.

The concept behind the HYD42 took shape after Richard expressed an interest in the new GP42 class. After an initial investigation was conducted into the performance of a GP42 under IRC it was decided that the new design should maintain the performance characteristics of a GP42 but should be made as “IRC friendly” as possible. In short this has been achieved by carefully playing down some of the racing features but for as small a weight penalty as possible. The interior volume is a little greater compared to a generic GP42 and there are a few more creature comforts including a seated navigation station, workable galley, saloon area with table and an enclosed head compartment. On deck however it is a pure race boat. There is a large cockpit incorporating pedestal driven primary winches for line speed when gybing the large masthead asymmetric spinnakers which are flown from a centreline retractable bow sprit. Oystercatcher XXVI is tiller steered which was an early request of Richard’s. While there is the facility to change to wheel steering, those that have helmed the boat seem to enjoy the sensitivity and simplicity that the tiller steering offers.

Oystercatcher XXVI was built by double Queens Award yacht builders Oyster Marine Ltd at their Special Projects facility in Colchester managed by Geoff Hunt. Using female hull and deck tooling the deck and internal structure is carbon pre-preg and Corecell while the hull itself is infused carbon and Corecell. All non structural internal units and fittings are E-glass / foam sandwich.

While the original plan was for this to be a one-off project there is now, following a number of inquiries, the opportunity to use the hull and deck moulds for further builds. Please contact Tom Humphreys (th@humphreysdesign.com) for more information.