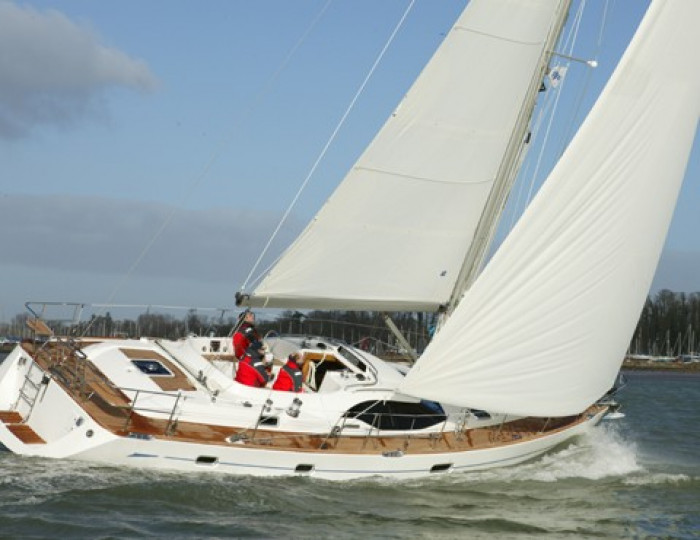 If one were to draw up a list of the most commonly used words in maritime marketing literature, near the top would have to be optimisation. It’s an easy one to claim but sometimes not so easy to justify, and in consequence the word has become somewhat devalued. But when Oyster came up with the deck saloon concept it represented a revolution in cruising yacht design, and the stream of business that subsequently flowed the company’s way has allowed them opportunity to hone the concept, indeed to optimise it in the tightest sense of the word, in a way that would be hard for anyone else without the same market penetration, the same customer feedback and same thousands and thousands of sea miles.

When we came into the picture with the Oyster 56, we tried to ensure that any contribution we made would add to the mix rather than necessarily change it for change’s sake. And having been responsible for eight models now we in our turn have been allowed to have our opportunity to optimise the product. The new Oyster 46 has, therefore, benefited from a level of refinement that only this continuity can bring. Design team discussions frequently revolve around inches here and there, and with a clear picture of how the internal layout had to work we were then able to resolve all this into a fast and forgiving hull form, with clean lines on a long sailing length, with a fairly fine entry to cleave through the waves and very easy run aft to roll away the miles. Indeed the prismatic coefficient – the naval architect’s ‘handle’ on the distribution of immersed volume – has been optimised on the 8-9 knot speed range to offer excellent passagemaking potential. And with a healthy ratio of sail area to displacement, the boat will return enough sensitivity in the light to make her a sailor’s yacht.

In summary, though measured evolution may be the name of the game there is sparkle aplenty, and many instances where one might fittingly tag a little ‘r’ to the front end of the word ‘evolution’. The deck, for example, while displaying all the concern for ergonomics that characterises the Oyster fleet, has taken on quite a new look and feel as developed for the Oyster 72. And knowing one’s inches in terms of internal definition has hardly been a stranglehold for the naval architect. On the contrary, it takes away the concern for contingency and leads to a very well rounded package.