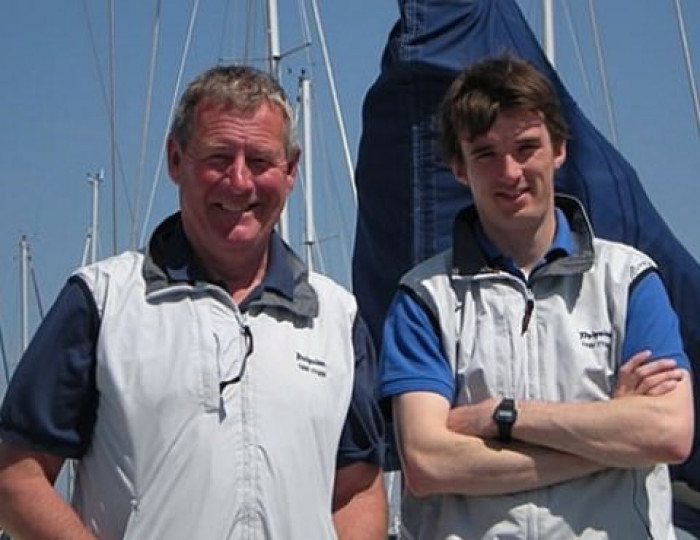 Congratulations to John Loden and crew for their success in the Morgan Cup on the HOD 35 PSIPSINA.Please find the race report below.

Friday saw an easterly, rather than the westerly that had been forecast, as we started from the Squadron line out to the east. We figured the shore end of the line was the place to start and lined up accordingly. Once across the line, Innovation alongside us was desparate to get us to point up, more than we needed to in order to clear the mark, Prince Consort, except that it was the Trinity House bouy that we, along with Innovation and Puma Logic, were about to miss. Not a good start ! However all 3 boats rounded the mark safely, even if a bit late, and then following the island shore turned out to be a good tactic and by the Fort, we were at the front of the 2-handed fleet and pretty much all of IRC2. The run down to the Nab consolidated our position. At the rounding, we reckoned the new course to the laid mark in the Channel would be a reach and dropped the kite accordingly. Except that it was only a slight harden-up, so we quickly re-packed the kite and re-launched it. Talk about little mistakes wasting time !

The run down to the mark was fun as the lit-buoy was visible only at about 300 metres and was in the vicinity of a very brightly-lit fishing boat making identification tricky. Then a long beat back to the Sussex coast found us not so far behind quite a few class 1 boats; progress was looking good. As we spent the day running over to France, we had all the 2-handed and Class 2 boats in sight – just behind us, but only just. Because there was a J105, Diablo-J, clearly making good progress through the fleet catching us up with a perfect wind angle for a 105. Fortunately for us, as they literally drew alongside us, the wind went forward and out came our secret weapon, our A5 storm spinnaker which is very flat cut and perfect in light airs slightly to windward (we don’t yet have the universally used Code 0). And off we went, not at great speed, but sufficient to pull slightly away from the fleet and directly towards Cherbourg, now in sight.

Previous experience (learnt in the Le Havre race) had taught us that, at the French coast, when the tide is about to turn east (as it was that afternoon), it’s essential to keep up-tide of the mark; and we duly did reach the western side of the Western entrance to Cherbourg harbour. The wind was dying but we managed to creep, agonisingly slowly, through the entrance before safely turning east along the inside of the breakwater towards the line under our big runner. The line was crossed and no one was close enough to get us on handicap; 2-handed and IRC2 were ours.

So up to the bar, without bothering to look at the results board, for a couple of beers. Then somewhat to our surprise, one of the Race management committee was particularly fulsome in their congratulations; ‘thank you’ I said. ‘No, you’ve come 1st overall !’ We were amazed & dumb-founded. But it was only the next day back in the Solent when Louay Habib rang me and said ‘what does it feel like, John, to have won the Morgan Cup ?’ that I realised just what we had achieved. A superb feeling which set us up well for the forth-coming trip to Wicklow for the biennial Round Ireland race.