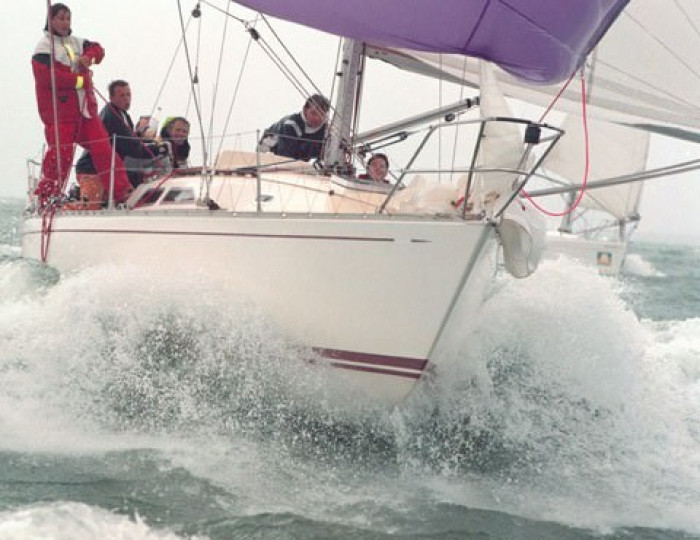 I decided to do the last RORC race of the N Hemisphere of 1992 in my Rob Humphreys designed MGC27, provided there was no gale warning on offer the day before, as the boat was a little small and tender. I had a gallant crew of five. When it came to the decision point there was a gale warning for every UK forecast area except in Wight where the race to Cherbourg would take place, so we went. We were one of the smallest boats in the race.

It was an evening start and the weather was gentle, warm and sunny to start off with, but by midnight the barometer had dropped 10mb since the start, there was no wind and the rain was thundering down on the deck. When the wind came, it came at over 30K, so we went straight to our storm jib and put in 3 slabs, all we had, though we put in a fourth slap in the main after this race. Five of us sat on the rail all night as the seas and wind built up. At one point I suggested to Andrea Merrello, a young nuclear engineer from Italy, that he find the seasick pills down below. After a long delay he came up with twin tubes of Araldite! Andrea tried to get me to get him a job with Lewmar. I didn’t, but I did find him a job with Harken instead, and he is now the top Harken man in Italy. But back to the race. We kept hard on the wind all night, knowing the tide would turn against us in the last hours of the race and only gave away our windward gauge when the harbour entrance was almost abeam. As we reached in to the finish we saw a number of bigger yachts, even Class 1 yachts, struggling against the tide right inshore. We had the best-corrected time for the bottom 2 classes.

My next boat was a Rob Humphreys-designed Contessa 33. When I bought her she was in need of much TLC and I had the pleasure of Harkenising her and doing a job on her otherwise. She went very well once the wind rose above 14k and she won her class at Cowes three times and once at the Scottish Series and once at Cork Week. In one race in the Scottish Series, when it was blowing force 6, we lost the top batten before the start, so the main didn’t set too well. Luckily there was a short reaching leg from the windward mark so, after the beat, Tim Jefferys was hoisted up the mast with an over-long spare batten. He disappeared out of sight behind the main, swinging far out to leeward, and then swung back on the rebound like superman. He caught the back of the main, measured the batten, marked it and sent it down for cutting. He then fitted it and was down on deck about10 seconds before the mark. Our rounding was not too bad, but most of the other competitors round us were so entranced by Tim’s amazing feat they made a mess of it.

. During the whole period of ownership the Contessa 33 Owl never failed her crew on the racecourse, though on one occasion her crew nearly failed Owl. Bringing her alongside a pontoon single-handed, apart from my spaniel, with a strong offshore wind, one needed to jump ashore holding both bow and stern line. Having done this rather adroitly, imagine my surprise when Owl started accelerating ahead at full revs. The dog had trod on the combined throttle and gear leaver, and Owl was off! Taking a run down the pontoon I was just able to jump on to the fast departing transom, like a monkey into a banana tree, and bring Owl under control.

My third Humphreys boat was a HOD 35. When she was new she had to go back to the builders in Cornwall by lorry for some guarantee work. I had put together three boats for a club team for the Round the Island Race, but the boat only returned to Lymington late on the Friday beforehand, just in time to get the mast up. We loaded her up using a check off list and sailed at 0400 in the morning , and went on to win her class. The good thing was that the HOD 35 was a great racing boat but also a remarkably good cruising boat, as were her predecessors. Amogst many other cruises we took her to the Netherlands and went through the canals to the Ijsselmeer, we went to Ireland and did the south west coast, and we took her down to La Rochelle and beyond in France. There are probably not many racing boat owners who would be able to do that.

My three Rob Humphreys designed yachts gave me and my crew a lot of fun. They were all fast, versatile and handled well. The Contessa 33, in particular, had a constant stream of successful racing results.

RECORD OF THE CONTESSA 33 OWL RESULTS

Round the Island Race 1st in class

Cowes Week 1st overall in class with 6 wins, and first winner of the Britannia Salver for most outstanding performance of Cowes Week