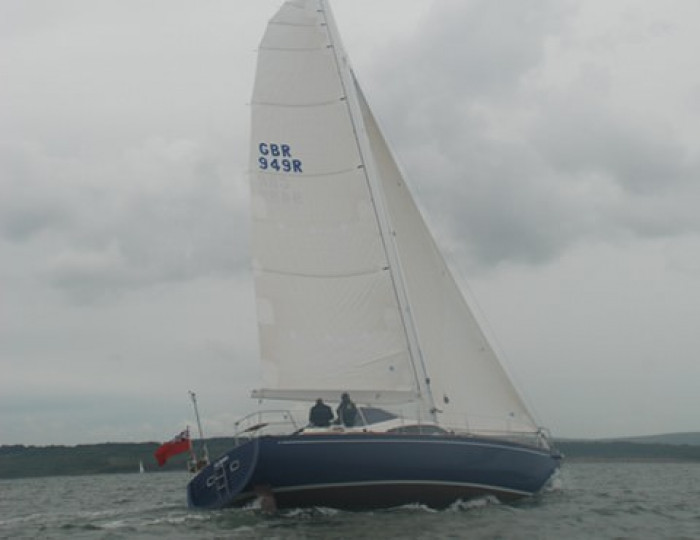 For many years I had been planning what my family referred to as my retirement boat. It had gone through a number of iterations, but before taking my rather crude designs to the experts, I drew up a brief description and a set of key criteria:

Fast, responsive, light and strong all speak to my racing pedigree, but short-handed was a deliberate move away from the hassle of having to assemble a sizeable crew. I wanted to be able to enjoy sailing two-up in an elegant craft and I wanted variable draft to access those shallow waters that add so much to the cruising experience.
Simple was intended to avoid fitting gear that would seldom be used. For example, the specification included a smart alternator, but no generator; AIS but no radar. Efficient was an all embracing concept that covered sail handling, performance, ease of maintenance and value for money. The idea was that future design or equipment choices could be weighed against these criteria, but this proved challenging in practice.

When I first took my ideas to Rob Humphreys he was dubious about fitting all my ideas into a 40 footer, but was very supportive about the project and helpful in selecting the necessary team. I had known Rob since 1976 and he and, his colleague Nick Pike, were good to work with, because they were prepared to put up with my sometimes obsessive attention to detail and general interference with the design process. However, Rob was also involved with a design brief for the Russian Volvo 70, so he made it clear from the beginning that he wasn’t able to work on my strange ideas for a rig. That is where Julian Smith came into his own, because he had worked on carbon aerofoil masts in New Zealand with Greg Elliott and he quickly persuaded me to add two side runners and save on the weight and cost of an unstayed mast.

The core design team was also made up of Neil Mackley at North Sails, Peter Gribble on electronics and Steve Etheridge at Seyco Marine, who was key to the whole project as builder and general problem solver. My experience to direct such a group and act as project manager was woefully lacking at first, but thanks to massive support from many people, the design and build moved ahead smoothly.

And the reality……..Alisara is indeed 40 foot long and includes some unusual features. In addition to the rotating mast, she has a jib boom, which incorporates a number of refinements over the more common type, and a 6 foot bowsprit. She has a fat-head mainsail and 4 headsails which all appear as ‘sausages’ from the sail bin just below the forehatch. Each headsail is at least twice the size of the previous one, so that one moves through the gears from storm jib, through working jib and drifter, to the 105 square metre, asymmetric spinnaker.

The rig has quickly proved its worth, because the main and jib provide much better than normal aerofoils, as the sheets are eased to rotate both mast and jib boom. Goose-winging is easy and the danger of sudden gybes by the jib boom can be countered by rigging a preventer to the end of the bowsprit. (It is not hard to guess why jib booms are sometimes nicknamed ‘widow-makers’.)

The deck is also unusual, because the centre cockpit includes a fixed canopy that covers an on-deck navigation area. No more disappearing down the companionway to consult a chart or pilot. All the heights and dimensions were custom designed for ergonomic efficiency. Finally, the spacious after deck was organised around the inflatable dinghy, which fits snugly between the lockers and is easily launched over the stern.

Below decks, the immediate impression is one of light and space. Headroom in the saloon is over 7 foot and the walls are adorned with Japanese prints. Dividing the saloon is the keel casing, which doubles as a bar when the keel is down. When up, the draft is reduced from 8 foot 6 inches to 3 foot 6 inches and Alisara can dry out, supported by the long flattened bulb on the bottom of the keel and the twin, outwardly canted rudders. Further aft is another surprise, which contributes to a stiff and powerful boat. Either side are water ballast tanks which fill in 5 minutes and can be tacked in 40 seconds. Weighing in at 700 kilos when full, they have been nicknamed the 8 gorillas, but they never need feeding, never complain and can be dropped overboard without incident.

Alisara is something of a wolf in sheep’s clothing. One has to look hard to discover the ballast tanks, because they are hidden away and most of the interior is given over to creature comforts. I am definitely getting soft in my old age. Light dimmers, fridge/freezer, microwave, domestic shower, duvets and proper pillows – why even my wife is quite impressed! However, penthouse style living has not completely taken over. I insisted on having special deep basins made that would hold water in a rough weather (I couldn’t find anything suitable off the shelf.) and along the complete length, on both sides, is a strong grab rail, something which is often overlooked on boat show models. Large stowage bins have been included and a row of hooks to dry oilskins and lifejackets. Careful thought has been given to power consumption, with widespread use of LEDs, incorporating a red diode for night lighting.

A custom made boat was part of the dream, but the tough question is ‘was it all really worthwhile?’ Emphatically I would say ‘yes’. Managing the project was enormously time consuming and often challenging, but overall very satisfying. A lot of the pleasure of a one-off was in overcoming the design challenges. I spent hours with the team sorting out the bow area, where jib boom, tack downhaul, anchor arm and pulpit legs have to coexist in close proximity. Other areas, such as the main hatch, were solved over lunch in the pub. The lifting keel caused some sleepless nights, because the 2:1 disadvantaged ram has to handle forces of over 6 tons to lift the 3 ton keel through 5 feet. This is where the epoxy foam sandwich construction gives way to judicious use of carbon.

I am sometimes asked whether Alisara has had to go through many modifications after trials. Fortunately, the answer is no. She has been soundly built and is fully living up to expectations. Inevitably a few small refinements were carried out over the first winter, such as fitting a stronger jib boom vang and a different water filter, but most of the changes have been as a result of getting to know her better. Anchoring in strong winds has been a worry because the wing mast tends to act as a sail, causing her to tack to and fro. The best solution to date has been to drop a large drogue over the transom, but a second anchor off the bow has also been suggested, although is yet to be tested.

If you have dreams that partly resemble mine and welcome a challenge, then my advice is pursue them avidly. It would be unusual not to have occasional doubts as to whether it is all worthwhile. Just as the buyer of an expensive new car seeks reassurance by reading again the publicity and comparing with other makes, so I have to remind myself of the unique benefits Alisara brings of performance and comfort in a 40 foot package. It was nice that Yachting World produced a complimentary review, calling her a ‘thinking man’s cruiser’ and a ‘custom cruiser with attitude’.

Just as important are the comments from all the people who have enjoyed looking over her or coming for a sail. Next year I plan to cruise on the West coast of Scotland and then cross to Scandinavia and the Baltic. Later, my ambitions are to take her to the Mediterranean and pastures new. I look forward to many happy years sailing Alisara and thank the team who helped bring her to life. 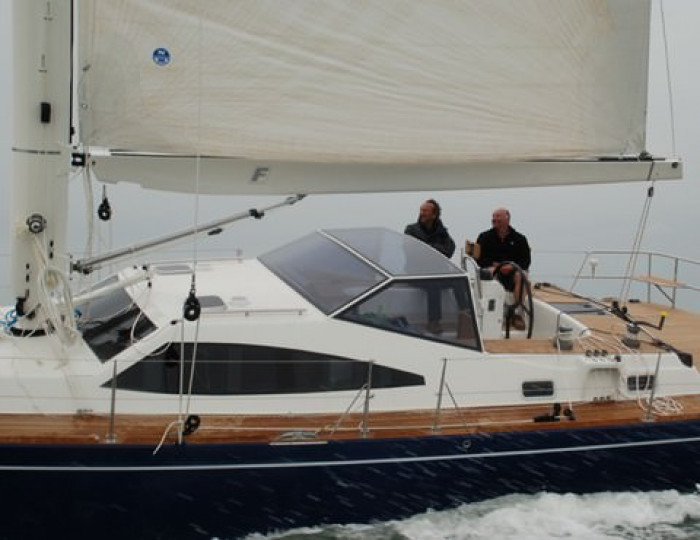 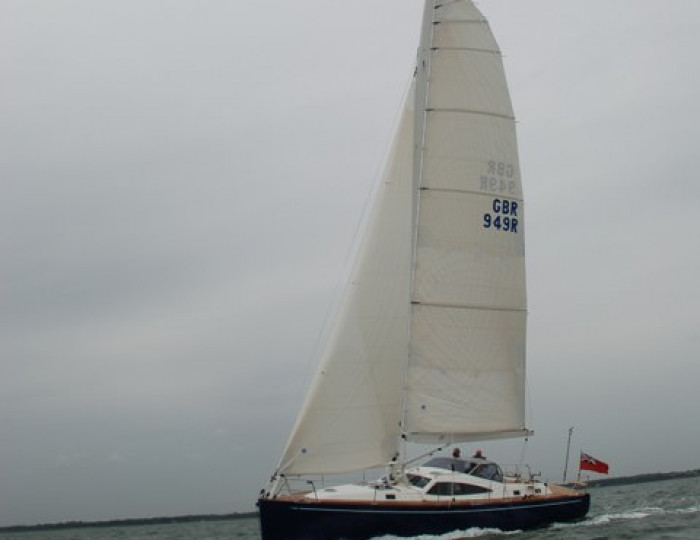 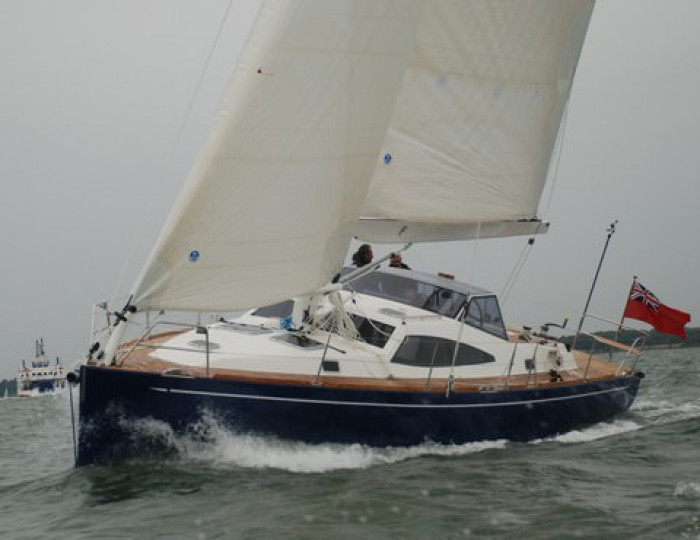