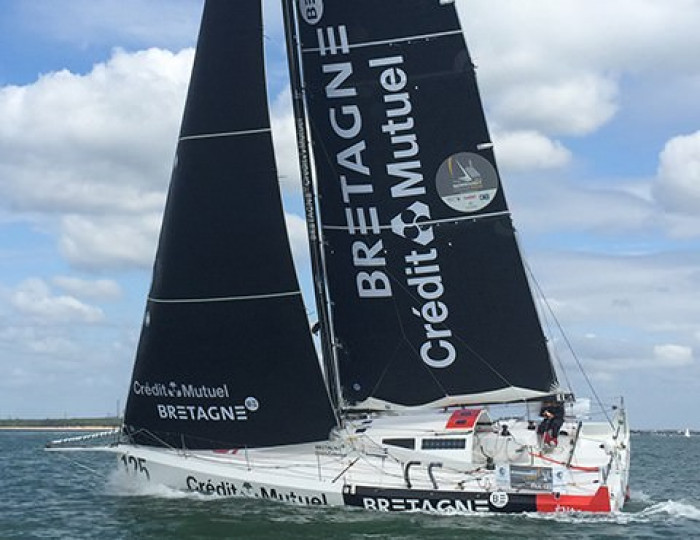 The Tom Humphreys designed Class 40 ‘Bretagne Crédit Mutuel Elite’ has won the 1000 nautical mile Normandy Channel Race. Skippered by two time Solitaire du Figaro winner Nicolas Troussel alongside co-skipper Félix Pruvot, the pair led the highly competitive fleet ever since leaving the French coast to cross the English Channel on the first night at sea, extending their lead up to a staggering 40nm at one point over their nearest competitor.

As anticipated, the race has thrown up a huge variety of conditions and challenges for the double-handed crews. The first half of the race comprised mostly light upwind sailing, placing great emphasis on how the crews could mode their boats for these light conditions and manage the strong tidal influences in the Solent and along the English coastline. Once into the Irish Sea, the boats had to negotiate a complex transition zone as an area of low pressure swept in from the west to replace the light northerlies, providing the boats with a bumpy, boat-breaking beat along the Irish coast before rounding The Fastnet Rock for a high speed downwind sleigh ride back across the English Channel.

Nicolas Troussel has a reputation as a great thinker on the water, with a history of shrewd strategic successes and we were extremely pleased when he chose to campaign one of our Class 40 designs. This latest victory makes it two wins from two on this season’s Class 40 circuit, following the team’s earlier success at the Grand Prix Guyader.