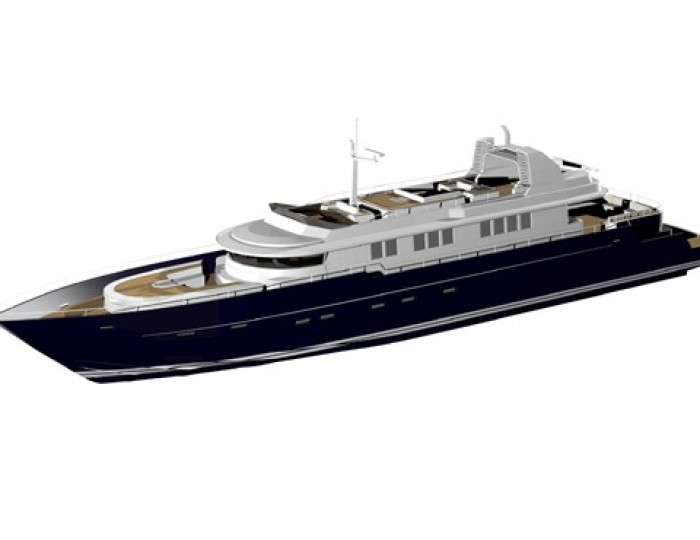 This is a serious seagoing motor yacht for a European client who requires weatherliness, speed and endurance as his priorities. The Humphreys studio carried out an extensive tank testing program to underpin the technical merits of the project, working with the Wolfson Unit of Southampton University who have considerable commercial powerboat testing experience. Much of this work was carried out in waves to allow the vessel’s responses and accelerations to be assessed and refined.

The ‘speed’ part of the equation – with its target in the upper fifty knot range – is not driven by ostentatious desire but by practical rationale. The area of a circle is proportional to the square of its radius, which in this context means that a boat traveling at sixty knots can, in a given time, access twice the cruising area of a boat traveling at forty knots. So when time is tight, but cruising aspirations are not, speed can be extremely useful. But the common trappings of that sort of speed – a ‘go-faster’ styling for example – are very much absent from this vessel. Indeed, the general style of the yacht is specifically intended to understate this ability, with a more workmanlike, even commercial look about the boat.

Construction of this composite yacht is currently under way in New Zealand, with project management by Barwell Project Co-ordination. The structural engineering work is being carried out by High Modulus to Germanischer Lloyd structural approval, and an interesting point here is that the load benchmark which Rob Humphreys set High Modulus, based on the accelerations the vessel had experienced in the towing tank, is significantly higher than GL require for commercial craft. So the result will be a tough vessel capable of being driven hard in bad sea-states.