The Oyster 745 is stepping into the territory described as the small Superyacht’s, and indeed she certainly delivers against those ambitions. Like some of the other recent models the 745 has been offered with a conventional or extended transom, and it seems to have been a fairly even split in terms of boats built. Rob has raced on both versions and feels it’s a pretty hard call, definitely a choice an owner can make on personal preference without worrying that he is conceding anything by way of performance or handling. 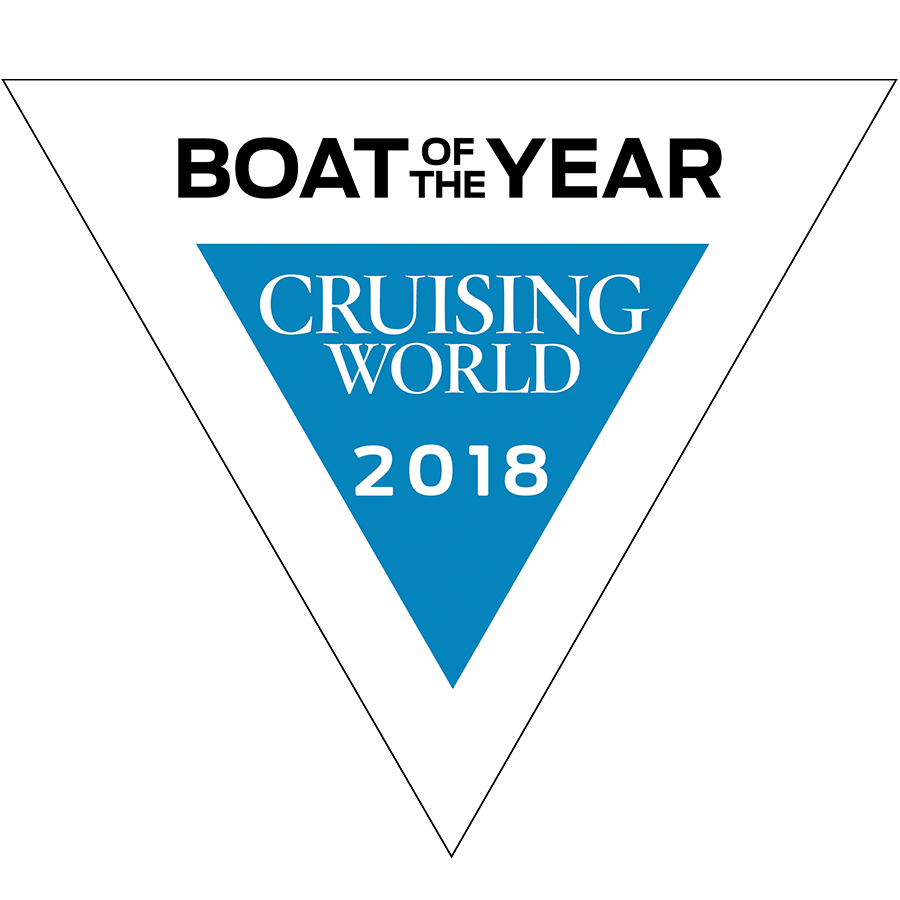 It’s a rare year that the Boat of the Year contest boasts a pair of yachts with price tags of $4 million, but for the big bucks, the Oyster delivers big time.

It’s a rare year indeed that the Boat of the Year contest boasts not one but a pair of yachts with price tags north of $4 million. And in many ways, the two boats that fit that bill for 2018 could hardly be more different, one being an exquisite monohull and the other a no-holds-barred catamaran. But they both shared some similarities, including being set up to be run and operated by a professional crew. In fit and finish, they are both examples of state-of-the-art boatbuilding and technology, which is why the HH 66 and the Oyster 745 vied for the title of Best Luxury Cruiser.

Perhaps the most intimidating — yet cool — yacht in the competition was the amazing all-carbon HH 66 cruising catamaran. Judge Tim Murphy said, “It displaces less than 40,000 pounds and, with the exception of the Stiletto, had the lowest displacement-to-length ratio in the whole fleet, at 61. It’s a boat where they talk upfront about flying hulls on a cruise-worthy catamaran. Along with foiling, that’s a rather new thing — to go out there and fly a hull on purpose — in the way we sail our boats. And the build quality was just gorgeous.”

In around 10 to 12 knots of breeze during sea trials, the HH 66 trucked upwind at 12 knots. “I didn’t know that sailing a 66-foot performance cat with a tiller was on my bucket list, but I’ve now added it to my list and checked it off,” said Bill Bolin. “It’s a very impressive boat, very high tech.” Among the features in the molded helmsman seats are push-button controls for the mainsheet,

traveler and daggerboards. To have instant access to critical sailhandling and boathandling tools at one’s fingertips is truly remarkable.

“The tiller is light and easy. It really responds to every move you make,” said Ed Sherman. “That was a treat. This is a systems-rich boat, and the systems work great. It’s truly a boat for a pro crew — and one that knows what it’s doing and has a lot of experience. But without a doubt, it was the boat I had the most fun sailing in the entire fleet.”

The HH 66 blew the judges away with its superb sailing performance.

“This boat absolutely blew me away for a lot of reasons,” said Sherman. “It was an extremely complex boat. It’s got a day generator and a night generator. It’s a big shaft-drive engine setup with a lot of systems. But when you climb down into the engine room, all the primary systems are located around the perimeter of the space, with really great access. So there are no problems with that.”

“This boat is beautifully built, nicely engineered, and the systems were good and accessible,” said Bolin. “I think you do need a pro crew. It’s not a couples cruising boat. You need someone to take care of it, maintain it and even sail it for you as well. That being said, the crew’s going to be pampered. There’s a beautiful crew cabin forward. I also made a note that this was the first boat with a real companionway that wasn’t a ladder. It was a stairway to heaven. Plus, the speed and manoeuvrability surprised me. It felt good. It was easy to move around on deck and below, and very comfortable. I’d like to spend more time on it.”

“It’s a fundamental piece of the boat’s DNA to have professional crew,” added Murphy. “With the quarters the boat provides, they’ll attract top talent. We’ve seen a lot of Oysters over the years, and I think we’ve found the boat where the company really knows where its feet are and hits the sweet spot. It’s a little bit out of Cruising World’s target, it’s the extreme top end of what we’re looking at, but I think they’ve done a spectacular job.”

Murphy’s mates agreed, and they unanimously named the Oyster 745 the Best Luxury Cruiser for 2018.