The Elan 350 Wins European Yacht of the Year Award 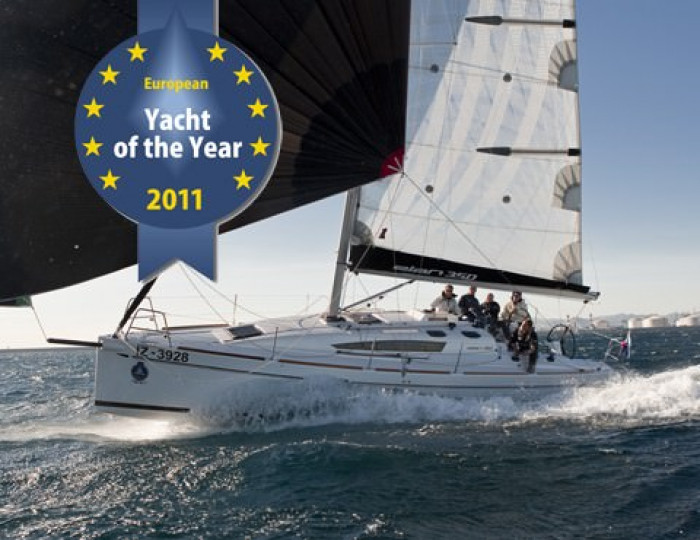 The European Yacht of the Year Award has become a major event for the marine industry, with eleven premier European yachting magazines providing testers and judges for a serious appraisal of sailing’s latest offerings. The presentations were made in Dusseldorf Boat Show on the 22nd January 2011. With about seventy designs eligible twenty were shortlisted and nominated for four categories – the Performance Cruiser category, the Family Cruiser category, the Luxury Cruiser category and the Special Yacht category (for those sitting outside normal classification).

Nominees for the Performance Cruiser Category were the Beneteau First 30, the JPK1010, the Azuree 40, the Dehler 32 and the Elan 350. We were pleased to understand that the Elan 350 received the unanimous vote of the judges.

‘…for me the Humphreys-designed, Slovenian-built Elan 350 demonstrated more than just impressive straight line speed. Her ease of handling, balance and unflappable behaviour makes her one of the best examples of the new age.

‘It only took a few gusts and the odd tweak of one of her carbon wheels, to see her speed jump from 12 knots to 15 as she slid down the face of a small wave. It takes very little indeed to light up this 35-footer downhill, but it takes a great deal to unsettle her. The combination of twin rudders and a well-placed chine see to that.

‘Light, direct and responsive on the helm, she is an absolute pleasure to push hard. Whether the family would thank you for a straight wake and a bow wave that arcs above the top guardwire on both sides is a matter for debate, but the point is that, like many modern cars, she is capable of plenty more than most people would have the nerve to try. And that bodes well when it comes to everyday performance when she is nimble, light to handle and easy to sail at a brisk pace.’